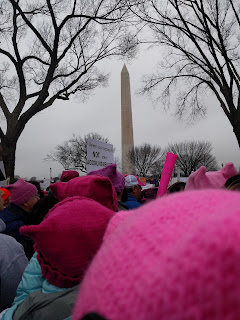 It's funny to me that I started this blog without any particular interest in feminism as a focus of thought (beyond the airborne feminism a person born in the early 60's would have experienced) and have come upon so many roads leading to women's rights.  I just wanted to talk about the Spirit and how it drags me out of my den.  But being aware of Pussy Riot when they were still imprisioned and deciding to post about that caused a swelling of hits which hasn't really subsided even now.  I took this picture of pussy hats around one of the greatest phallic symbols (which I admit to venerating as an object of national significance) in the history of humanity.  I took it at the Women's March on 1/21/2017.